The release of State Of Deception, Conception’s first full length album in over 20 years, marks the full-circle evolution of the band. It is an un-rushed yet seemingly fatalistic journey:

Formed in the late 80s out of the industrial Norwegian town of Raufoss, the band featured Tore Østby on guitar, Roy Khan on vocals, Ingar Amlien on bass and Arve Heimdal behind the drums. Naming themselves Conception, they were to immediately display their propensity to operate ahead of the curve by self-releasing their debut album The Last Sunset, a process which took considerable effort against an industry backdrop totally unaccustomed to such independence of spirit. A deal with Noise Records and three subsequent albums followed, amidst a host of European and Japanese touring, the combination of which went a long way to securing the band’s iconic status and cult following. And then, nothing...

Conception never formally disbanded, never fell out amidst a background of seething resentments, or embittered personalities. Instead, they simply explored other musical avenues. Tore founded progressive metal band ARK, Ingar formed black metallers Crest of Darkness, whilst Arve enjoyed a stint in blues rock outfit Nickels & Dimes. It was Roy who went onto most obvious public recognition as frontman of melodic hard rockers Kamelot. As time elapsed, and as Roy in particular experienced significant burn out under the unrelenting glare of the public eye, it appeared this particular musical chapter had closed for good.

Yet that was to reckon without the ambitions of the original band line-up, who had remained friends throughout the intervening years. A 2018 reunion, intended only for the enjoyment of the band members themselves, went viral when rehearsal footage leaked online. A Norwegian prog metal snowball was set in downhill motion. A whirlwind eighteen months ensued, encompassing a successful crowd-funding campaign, a near-fatal financial implosion (the crowd-funding income sank amidst Pledge Music’s much publicised bankruptcy, though the band worked overtime to honour fans’ investment), the re-presentation of Conception to a new generation of fans, a brand new EP (2018’s My Dark Symphony), a triumphant live return to their hometown of Gjøvik, and a hand-picked selection of rapturously-received festival appearances. With their trajectory clearly in the ascendancy, it was only a matter of time before conversations about a headline tour and full album release were to be turned into realities. 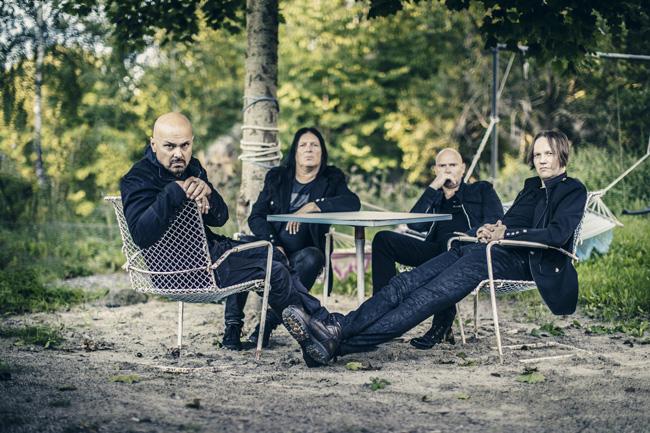 And so April sees the release of State of Deception, a nine track tour de force which lead singer Roy Khan describes as ‘probably the best thing I’ve ever been involved in!’ The bar is set high then, but the band are more than happy to do so, as guitarist Tore Østby explains; ’If we didn’t think we were capable of surpassing our previous work, we wouldn’t be here! We’re super proud of every single track on this album.’ And rightly so, from the raucous riffage of No Rewind to the soaring tension of The Mansion, this is an album that eloquently showcases the band’s infamous musical breadth, as much fuelled by a unique blend of classical and even jazz inspirations, as those of the rock and metal influences they wear most evidently on their collective sleeve. ’We’ve always said that we have a need to do what we feel is right for our music,’ Østby explains unapologetically, ’We couldn’t limit the musical scope of Conception even if we wanted to.’ Its a boundaryless approach that is to the band’s immense benefit, and one which is mirrored also in their business approach.

’We’ve worked with record companies in the past, and by definition, the artist sits at arms-length from their fanbase,’ Khan muses. ’We felt that was an unacceptable compromise.’ The result is not just a self-release via their own record company staffed by their own employees, but an entirely fan-funded process. ’The Pledge debacle was a learning experience, so this time we are reliant upon no-one other than ourselves to deliver to the fans.’ relays bassist Ingar Amlien. This is no ordinary ’direct-to-fan’ relationship though. Yes, the CDs, vinyl, tees and hoodies are all there, but that’s only to scratch the surface of what the band have made available. 2020 will see the third annual Conception summer camping trip, spending an entire weekend in the company of the band and just a handful of other fans in the beautifully remote Norwegian mountains. It will also entail an album pre-listening party, around which a select few will be able to spend the entire weekend living with the band in an Oslo B&B. This is artist access 2020 style, in an effort to provide a degree of connection and insight that is unheard of within the major record company environment. ’For an artist to see the reaction from a fan the first time they hear a new song is an extraordinarily powerful experience,’ offers Østby. ’Whatever happens, these are shared encounters that will never leave us, band member or fan alike.’

2020 will also see the band headline the Friday night of Atlanta’s ProgPower USA festival in September, whilst also partnering with JVC for a full release in Japan, making for a particularly momentous year in the development of Conception. State of Deception is both a definitive album release statement, as it is also a career milestone, recognising a lyrical depth that acknowledges the current social climate. Says Khan; ‘The lyrics of the album revolve around human error and betrayal, hence the album title, but also touch upon everything from people’s facade to climate change, religion and politics.’ One thing is clear; Conception are back and have come full circle.