+ release video single Not For The Masses 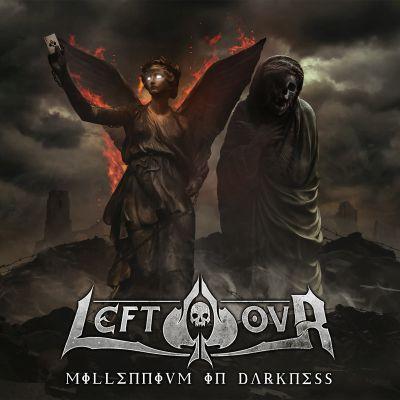 But do they even have swamps?, might seem the obvious question if you’re looking at Puerto Rico from a southern metal, probably stoner point of view. The answer is a simple yes – and boy do those mosquito-ridden wetlands gain attraction for societal outcasts who committed their lives to strictly western heavy metal. Enter LEFT-ÖVR, a booze-oozing, green smelling, straight speaking gang of things from the swamp with their brand new video single Not For The Masses. Emerged from two sizzling hot underground bands – one thrash/groove metal and one southern rock – that both dated back to good ol’ tape trading times of the pre-internet era, the name is an amalgamation of friendship and respect as both former bands have lost beloved founding members to tragic death. LEFT-ÖVR, the literal remnants of the outcasts, who shared stages for decades and finally regrouped in honour of the lost ones back in 2018, started off as power-driven, wild jams to recover, sweat the past out and form a strong bond of both genres, resulting in their own formula of wild, gritty and tremendously catchy southern metal. No Latin-American rhythm and ease allowed – go look elsewhere if that’s what you’re searching for!

Friends of beloved southerners, such as Texas Hippie Coalition or Down, who need their daily fix of brutal, heavy and unmasked tunes meant to scare off gators: By all means, stay! Here’s why LEFT-ÖVR are catering to you: "In an age driven by mass media, trends and influencers, we choose to play for the real crowd, the ones who make their own rules, who despise trends and strictly follow their own hearts. We are not for the masses but for folks who are real!"

Not For The Masses is a fast banging, ass-kicking working class middle finger straight from the southern Puerto Rican wetlands that doesn’t knock politely, it takes your door down and your worries out like a shotgun. And it’s the first shot fired from LEFT-ÖVR’s upcoming album Millennium In Darkness which is set to be pumped in your direction this November. The album is coming right out of a two-year songwriting and production phase riddled with menace by hurricane Maria (inducing six months of acoustic playing due to a long black out), political turmoil, earthquakes and tremors that shook the island - violently taking out infrastructure everywhere - and finally an asshole named Covid. Could the title be any more fitting?

Anyway, time to kick back, pour some shine or light the green, set the volume to max and get your dose of sweat, swamp and rock’n’roll:

Pre-order for Millennium In Darkness starts today with Not For The Masses as instant grat, so happy huntin’ boys’n’gals!
https://orcd.co/millennium-in-darkness

+ release video single Not For The Masses