The Next Single Off Their Kingsbane – Deluxe Edition

After the album re-release of fan-favorite Kingsbane, Canadian symphonic metal stronghold OSYRON are ready to unleash their next big surprise: The re-recorded version of Griefmaker was now given its very own lyric video. 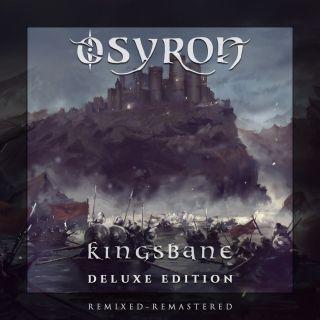 Accompanied by instrumentals that are equal parts relentless and atmospheric, Griefmaker speaks of warmongering and the inhumane horrors of battle:

Mothers, mothers send me your sons

I'll take the boy and carve out the man

The re-release of the 2017 album Kingsbane features remixed and remastered editions of all songs plus rewritten, rearranged and re-recorded bonus tracks with current drummer Cody Anstey. The precisely curated visuals in OSYRON’s new lyric video beautifully highlight the emotional message of the song, which has always been a favorite of the band for its remarkable potential and character: “Griefmaker was a song picked for its potential to be re-arranged. It's a very fleshed-out and layered song, and it has very atmospheric sections, but we've always felt that it could do with some extra reinforcement of those moments. We cut the time down on it quite a bit, and removed a lot of the heavily symphonic sections to make room for sections where the guitars/arrangements could take a front seat. We feel overall it's a more "mature" and "current" version of this song; if Osyron were writing this now it'd sound more like it does here than it did on the original release.”

The original recordings of the bonus tracks were written by guitarists Krzysztof Stalmach and Bobby Harley alone, but the Deluxe Version has the whole band collaborating. The Deluxe Version of Kingsbane was also entirely remixed by bassist Tyler Corbett and remastered by drummer Cody Antsey.

DREAM OCEAN Back with "The Missing Stone"

The Next Single Off Their Kingsbane – Deluxe Edition