After releasing the doom- and bluesrock-inspired track Sheeba (Queen Of The Ravens), Raven Black Night continue their voyage of exploration throughout their different musical impacts. This time, they are set to surprise us with a rather heavy-metal-influenced single named Her Sword Of Tears, the second single of their long-awaited upcoming album Run With The Raven.

The LP’s latest single starts off with an earworm-like guitar melody in the manner of the preceded single release – but this time, the song is not only played much faster, the guitars also sound heavier and more all encompassing than on any Raven Black Night release before. Combining a rather 70s-feeling-instrumental with a lyrical piece that revolves around a mystical setting and circumstances of desire and longing, the song sets a new standard for the Adelaide-based group. Raven Black Night songwriter Jim Petkoff comments: "Her Sword Of Tears represents a journey of one's inner belief and quest to find life's essence and beauty in a tale of chivalry."

This imagery is mirrored in the wonderful lyric video that comes along with the song:

Continuing their glorious journey through other-worldly settings and the various stages of rock music and its influences, Raven Black Night have once again managed to combine tried and tested musical patterns with their unique approach to careful experimentality and matchless acoustic traits. The tension in regards of the release of the upcoming album Run With The Raven, that is set for the 30th of October, increases steadily – mark the date!

Pre-sale for the album starts today: 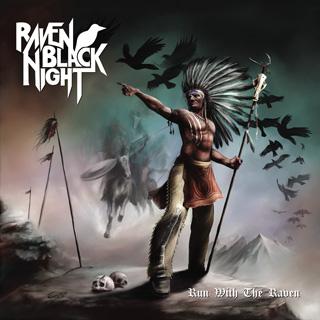 Run With The Raven

A Truckload of Traditional Doom From the Australian Wilderness