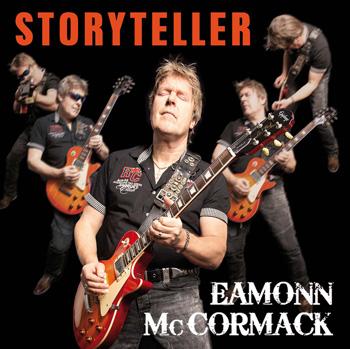 Lucky number seven ain’t always as lucky as it’s supposed to be, at least not for Dublin-based blues rock rebel Eamonn McCormack and the seventh album in his impressive career: Right before its successful digital launch, which got celebrated by the video premiere of the single The Great Famine, the release of the Irishman’s highly anticipated and critically acclaimed new record Storyteller took a critical hit by the pandemic and the cut-off distribution chains.

It’s been a rough patch for many who love their physical product but Eamonn and the band are now happy that the wait is finally over! As of Friday, May 29, Storyteller CDs are finally hitting the stores, so watch out for that at the dealer of your choice. The band is in excellent shape and morals are high, which is no surprise given the love that Storyteller has received from fans and critics alike in the meantime. This being particularly important for artists in these desperate times – and not at all taken for granted –, Eamonn would like to give a shout-out, virtual hug and huge “Thank you!” to everyone who bought, streamed or discussed the album in digital form despite so much bigger fish to fry for so many of us.