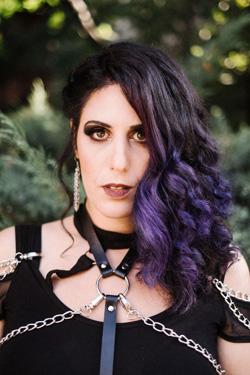 We can all to some extent agree that these are testing times. The mixture of not being able or allowed to go outside, meet friends, engage in our hobbies, find distraction from the struggles of everyday life, combined with fears about loved ones, the future, both jobwise and in personal life, or last but not least, our own health. It’s all actually testing in many ways, physically and mentally. And there are those who already struggled before, those who already were in a troubled mental state, fighting e.g. depression or suicidal ideation. Thoughtful and dedicated Israeli poetic singer-songwriter and gifted pianist Moran Magal did never shy away from thematizing difficult, touching and rather dark topics in her music, as she proved once more with her praised latest album “Under Your Bed” (2019). Some superb reviews applauded the melancholic approach on those topics for its somber beauty and appropriateness. The first single from above-named album, the title track, dealt with classic childhood fears and was a song against child abuse, while the second single “Black Swan” addressed female roles in society, underlined their strength and expressed how freedom for all women is without any alternative. It was followed by the epic tunes of “Tododo”, a song about the haunting childhood memories after the death of a loved one.

It’s not a surprise that the Berlin-based multi-talent now again uses the seething, archaic elemental force that is (dark) metal to get her head around the current situation and send out a message of virtue, hope and blessing to those who need it the most - with “Under Your Bed”’s opening track “Always Something”. And just like the other singles so far, it’s one with a very special story behind it, that the artist hopes people can find strength in. Here is her personal note about it:

“Always Something is about dealing with depression, about feeling like you are stuck in a vicious cycle and can’t break out of it. It’s also about people who suffer from mental illness. Unfortunately, not all of them ask for help, they feel like they are alone, too ashamed or afraid to seek help. The story behind the video is based on the real and tragic story of my cousin. In the video, we wanted to give it a positive ending, where the person who deals with this disease seeks and finds help. Matthias Busch from the Stimmgewalt choir, who recorded vocals for our album, directed the video, and most of the actors are also from the choir. On behalf of myself and the band: We are very proud of the outcome. I hope this song and video will inspire lost souls to seek help and find their blessing.”

And once more, Moran Magal has teamed up with like-minded artists, namely Matthias Busch and the Stimmgewalt choir, to cast her message upon the world. And Busch’s words prove why this team was just the perfect combination to deal with the topic in the most sensitive and respectful way, yet with a touch of artistic freedom and beauty:

“Most of us have an inner voice, but very few perceive it as being independent of their own thinking or hallucinate it taking corporeal form. Experiencing something like this is not a joke, it can ruin a person’s life – but it doesn’t have to. I felt it’s important to show some aspects of mental illnesses like schizophrenia (while taking some creative license, this is a music video after all) and also have the story resolve with arguably the most powerful tool available for coping with it: therapy. I was very lucky to work with a wonderful team and cast, who went with me on this journey with enthusiasm and the best attitude. Thank you to St. Hedwig Hospital Berlin for letting us film the final scenes on their premises and trusting us to approach the subject matter respectfully. I hope we succeeded in that.”

Moran Magal’s “Always Something” is available on all (streaming) platforms.

Moran Magal: New Video + Album "Under Your Bed" Out Today!

Moran Magal release video for Take Your Money together with album Under Your Bed!

Moran Magal: Third Single ‘Tododo‘ gets us excited for ‘Under Your Bed‘