Anthems of pagan wars against Christian invaders and traditional Baltic songs: Folk metal warriors RomuvoS bring the ancient practices and traditions of the Baltic people back to life with soaring vocals, distorted riffs and traditional instruments that will have you raise your horns and join in the battle cry.

And it’s a battle they are ready to take on with full force and in every respect. The band’s name refers to the reinstitution of the traditional pagan ethnic religion of the Baltic people, reviving the ancient practices of the Lithuanians before their forced Christianization. Back in 2012, RomuvoS started off as a one-man operation by singer Velnias (also keyboards, guitars and percussion), drawing heavily from Baltic folklore and myth, using themes of ancient gods and historical battles as well as a general love for and connection to the Baltic area and released Romuvan Dainas (2014). Right after that, Velnias ensembled a musical force around him to record the second album Infront Of Destiny in 2016. The band, now complete with members from Lithuania, Germany and Israel started to play big festivals around Europe and signed to Dangus Records. 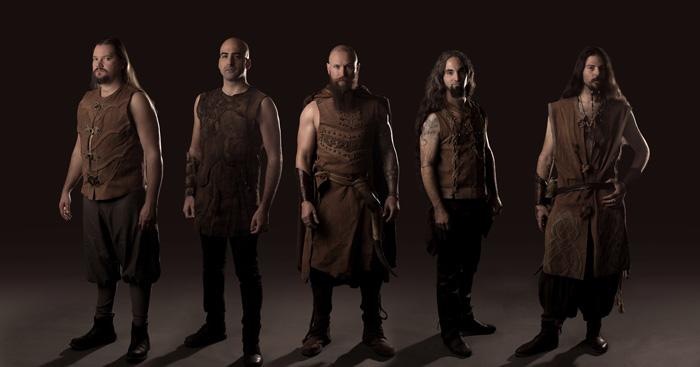 Subsequently, the current line-up around founder Velnias, Blackbard (lead guitar, nyckelharpa, jaw harp, flute, percussions, bagpipe), Ofer (rhythm guitars), Ąžuolas (Bass) and Morax (drums), went on their quest of creating the third album: The Baltic Crusade. On this work, the band have made it their mission to create an album deeply rooted in their own history, thematizing the Lithuanian Crusade portion of the Baltic Crusades, a series of battles taking place from 1236-1279 in the aftermath of the “great” crusades. During that time, the pagan Baltic warriors had to defend their homelands against forced Christianization by the Livonian Order branch of the Teutonic Knights. Each song of this epic concept album represents a specific battle, which makes it a great historical piece of time, telling the tale and immortalizing the legacy of the last pagans of Europe and their stand against the Christian invaders. And it’s not a small spoiler that it did not go too well for the Teutonic Knights.
Taking the topic to the present, the band find relevance in these ancient happenings that can easily be applied to today’s modern world. The message can be heard loud and clear, as – in the same defiant spirit as their ancestors – the musicians proudly state: “Don’t bend your knee to no one, raise your horn with mead before a sword with blood, don’t be proud just because you were born to some race or status, but be proud of the things you get by hard work and challenging efforts, don’t just find your way, make one!”

The Baltic Crusade was mixed and mastered at Tidal-wave studios by Patrick Damiani and will be released through Dangus Records on June 26th, 2020. Join the fight!

And this fight actually starts today, with the release of the first single (and video for) Saule (1236). So better brace yourselves! Because what singer Velnias has to say about this song gives a first idea of the impressive overall concept behind The Baltic Crusade:

“Saule (1236) is a song about the great battle that took place in the year 1236, between the Livonian Brothers of the Sword and the pagan warriors of the Samogitians and the Semigallians. The battle inspired rebellions among the Curonians, Semigallians, Selonians, and Oeselians - tribes previously conquered by the Sword-Brothers. Till this day, the battle of 1236 is a symbol of the Baltic Unity and the great stand of pagans against the Christian invaders. So raise your swords, hold your shields, we march to battle!”

In Your Face, Crusader!

RomuvoS’ Baltic Crusade goes on with the new single "Skuodas (1259)"