Nothing New Under The Sun out now! 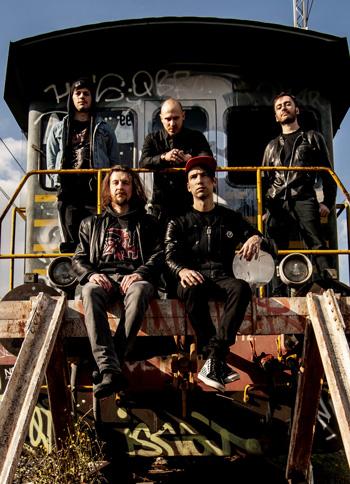 One of the big traditions in metal has always been to write down what is on your mind and throw it into the open at full volume. A great example of this is how the legendary thrash bands of the 80s made visible what they thought of political happenings, of the cold war with its nuclear threat looming over everybody's heads, of the rich exploiting the poor. And sadly, as it seems today, not many of these issues have been resolved in the last decades.
Bassano del Grappa, Venetia, Northern Italy. Enter Minatox69. They have a look around and see what is happening in today's world. And they find reasons enough to be angry. Be it certain 'clerical' errors, racism, warmongering, mindless pollution of the environment or the madness that social interaction sometimes seems to be these days – it is clear that our world is still not in the shape it could or should be in. And that pisses them off! Big time! So what to do?
In the case of Minatox69 it means doing an own take on metal tradition, infusing modernized melodic thrash metal with influences from funk, groove and death metal, making anything they can get their hands on their own and blending it into an awe-inducing, unpredictable hurricane of outrage, all to raise awareness of the things that are going wrong, rallying the metal fans together to effect positive change to the full extent of their ability. Amid all those strong feelings, Minatox69 nonetheless convey a zest for life that seeks its equal, since it should not be forgotten that although one can criticize society, the desire for change primarily comes from being a part of it and longing to enjoy it. To say it in in the band's own words:

“He who knows his goals gains strength from it. Deep reflection is the starting point of any success. We truly hope that our music can bring people together, our aim is to share our energy with the world get people “banging”, so give ‘Collapse’ a listen and stay tuned for more... the best is yet to come!"

And to prove this, Minatox69 give a first impression of the upcoming album with the release of the highly expressive Nothing New Under The Sun: “The song is a social criticism of modern society and its mode of operation on a global scale, making countries work together like parts of a big clockwork and transforming citizens into numbers, thus depersonalizing and dehumanising their existence. Continuous transformations, both cultural and technological, don't lead to any changes whatsoever, which creates the impression that everything changes so that everything can remain as it is. The only hope for a real change can be found in the understanding of human nature, as humanity is both victim and creator of this self-constructed prison, which has its foundations in a very deep human impulse: greed.”

In 2010 friends Fox, Bozart, Checco and Tado formed Minatox69, releasing the debut album La foca nel desserto the same year and adding second guitarist in Cupido to their ranks around the follow-up Hot Line in 2012. The next years saw the band touring Italy extensively with band members also taking part in various side projects and gathering experience before emerging back onto the scene as Minatox69 again in 2019, audibly matured, bringing with them a new offering in the form of the Zero EP and having signed up with Mad4Music Management. Released to critical acclaim, Zero not only scored the band various airplay spots but also enabled them to do gigs alongside Sepultura, Lacuna Coil, After The Burial and many others. Created under producer Stefano Orchid Santi's watchful aegis at SPVN Studio in Milano, Italy, their upcoming full-length Collapse presents a band exuding vigor, untamed energy and a sense of belonging!

Collapse can be ordered exclusively via the band’s Bandcamp in digital form!

Nothing New Under The Sun out now!