On Tuesday, May 2nd, the CMM team went to Hamburg’s Barclaycard Arena in order to meet their long-time partners and friends from Iron Maiden and finally celebrate with them “The Book of Souls” turning gold.

Indeed, more than 100.000 copies of Iron Maiden’s latest double album had already been sold in Germany within the five weeks following its release in September 2015.

The band’s show in Hamburg took place in the framework of The Book of Souls World Tour – 2017 and was the last of the five German shows they did this year. The NWOBHM legends will head next to the UK and will extensively tour the US and Canada until the end of July. Up the irons! 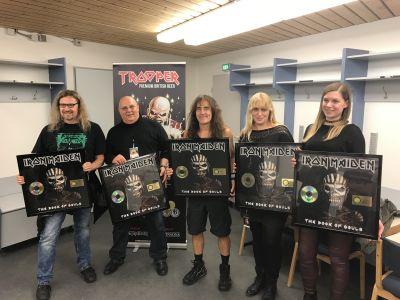