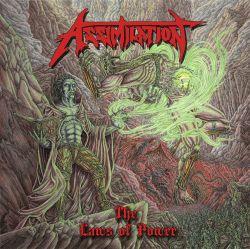 In ASSIMILATION’s new video for the song “Remotion of the Succubus”, the frontman Jesse Jardine not only demonstrates his skills at scaring the hell out of noxious fiends, but also tells us more about the trouble he encountered when he had to send one of those creatures back to the underworld. Check it out!

“Not to sugar coat it, this song is about my ex-girlfriend. It is about realizing that you are in a toxic relationship, and doing what is best for both of you, and removing yourself from it. It has to be done ruthlessly, there is no way to be nice about it. It is like chopping off a diseased limb so that your whole body can continue to live. Short term pain for long term gain. I think a lot of people have gone through something like this, and I see people in toxic relationships every day. I am just glad I had the foresight to see the problem and remove myself from it. Hopefully someone else can fix their situation with the help of this song. Or at least bang their head off, whatever comes first.”

“Remotion of the Succubus” is featured on the album “The Laws Of Power”, which has been released on March, 17th via SAOL. The tracklist reads as follows:

The Laws Of Power

Everything was better in the old days. For many fans of the original death metal of the 1980s, every new band dragging a legacy the legends of metal eked out in years into the mud with their pseudo curried, glossy sounds is just one more punch in the face. With their new first full length album “The Laws of Power” that is to be released via SAOL on March 17, 2017, Assimilation prepare for a counterstrike.

ASSIMILATION will be releasing their debut album, “The Laws Of Power”, worldwide on March 17th, 2017 via SAOL.