Something great is going on at the East Coast and in its secondary cultural melting pot, Boston. While big festivals all across the world, stadiums and major concert halls alike continue to represent the dying of rock and metal, as can be seen from the lack of non-geriatric headliners, here we have a thriving first class outfit that’s considerably younger but ready to seriously pick up the aging torch from giants and dinosaurs.

Enter FirstBourne, a multi-cultural quartet formed in 2016 on a strong foundation of musical passion, skill and friendship. Socially and culturally deeply integrated, Mike, Ven, Ian and Joe set out to bring back good old AOR in a super-accessible and sometimes pretty explosive form that verges on melodic metal in a way Helstar did back in 1989 with their awe-inspiring Nosferatu album, just vastly yet carefully evolved.

Friends of hard rockin’ grand masters, such as Axel Rudi Pell, Journey or Hardline, looking out for young blood in the traditional setting, will be greeted by four busy bees. Caring people who, when not adding to their caravan of award nominations and wins, or carving out kaleidoscopic arrays of shimmering melodies, are contributing to fundraisers for people in need, such as homeless veterans.

Following their more than respectable debut album Riot, FirstBourne are now back for their second attack Pick Up The Torch, a masterpiece that can and should be taken literally, just as the band’s name. Joining in from Brazil, India and the United States, the guys are deeply connected with the fact that they are indeed the first born children in their respective families, thus their namesake.

Whoever is going to hand acts like FirstBourne the torch after granting decades of inspiration, should risk an ear at this straight rockin’ AOR on melodic metal rails, ranging from dazzling sweep arpeggios at lightning speed to playful yet pick-evaporating shred attacks with the ever so godly smell of Van Halen in the air. Add the high-luster vocals, determined to set a new reference range for the genre(s), and the founding fathers should be left with a smile, laying back, taking in the well deserved strong sense of pride and accomplishment.
Some dinos, such as renowned white metal icons Stryper, are aware that the least healthy thing for this scene would be a generational gap, and are therefore taking up a clear position that should be the common stand for everyone really. Stryper have been welcoming mentors to FirstBourne in the past, sharing stages with the younger torchbearers. And FirstBourne, teaming up with many underground musicians from several bands, will pay their respect one week after their OCT 25 album release celebration by smashing the stage as Stryper, with a set of Stryper songs, at the Annual MT Heavy Metal Halloween Covers Weekend – a three day long, positively loud statement against said generational gap.

With Pick Up The Torch, FirstBourne’s music will be available on CD throughout Europe for the very first time, whereas its predecessor Riot has been sold in the United States exclusively. The new album also comes with a slight course correction for the band, as they have now moved on from performing as a female fronted outfit to having a male lead singer — namely Ian Raposa, who did a fantastic job on the mic and is generally a better fit for the band’s targeted genre(s).

FirstBourne don’t shy away from providing evidence, so here is the first single Breaking Chains, accompanied by a video. The song, which has been the very first work of the current line-up, is available through all digital platforms as of now. Here is all there is to know straight from the band:

“We had been working on song ideas for the follow-up album to RIOT when Ian joined the band. When it came time to record Pick Up The Torch, Breaking Chains was the 1st song that we worked on. It was great to work with Ian and watch this song evolve. The song is about getting off your current path to chase what makes you truly happy. All of us need a little courage to pursue the dreams we have had all of our lives and manifest them. This song is about finding that motivation to push forward to change the game. We hope this song is the push people need to change their lives and make dream chasing a habit.” 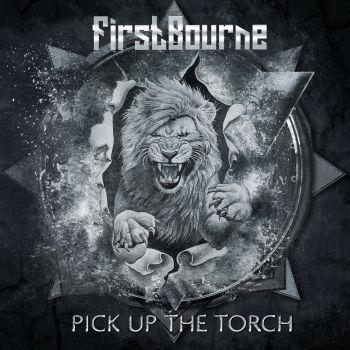 Pick Up The Torch