Today, the Finnish group unveils the second taste of the highly anticipated new album – the infectious, riff-driven melodic rock anthem Tell Me Why, which can now be streamed on Spotify, Apple Music, YouTube and other platforms. Check it out here:

Says front man Archie Cruz, “Tell Me Why was conceived during the hot summer of 2018 in Finland and perfected at the Hideout studios in Vegas later that year. It has a big, sexy riff and a larger-than-life chorus that's sure to rock y’all's socks off. Dig it!”

Tell Me Why and the recently released song Changing Of Seasons both feature prominently on Katharsis, which was produced, engineered, mixed and mastered by Kane Churko (Papa Roach, Ozzy Osbourne, Five Finger Death Punch). More information about the new record will be unveiled in the weeks ahead. Next weekend, SANTA CRUZ will kick off the Katharsis world tour in Tallinn, Estonia, where the group will support rock icons Bon Jovi at the 75,000-capacity Song Festival Grounds. The following week, the band's new lineup of founding guitarist/vocalist Archie Cruz, lead guitarist Pav Cruz, bassist Ero Cruz and drummer Toxy Cruz will perform live for the first time in their home country of Finland, when they play the country's largest annual rock festival, Rockfest, alongside the likes of KISS, Def Leppard and In Flames. 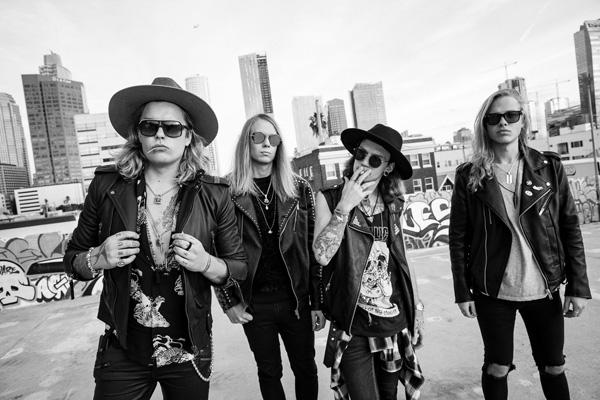 Following some additional high-profile European performances later in the summer (including German shows with Steel Panther and Whitesnake), SANTA CRUZ will once again set their sights on America. On August 27, the band will headline Hollywood's Viper Room, the famed venue where actor River Phoenix overdosed in 1995 (As longtime fans are aware, Bad Blood Rising featured a song named after Phoenix.) Tickets can be purchased at this location: https://www.eventbrite.com/e/santa-cruz-tickets-61943108505

In late September, SANTA CRUZ will then join the likes of Guns N' Roses, Disturbed and Godsmack at the Louder Than Life festival in Louisville, Kentucky. Two weeks later, the group will perform alongside Slipknot, Tool, Rob Zombie and others at Aftershock 2019, California's largest annual rock festival. Additional American performances will be announced in the near future.

Katharsis marks the beginning of an exciting new chapter in the story of SANTA CRUZ, who made impressive waves on both sides of the Atlantic in the five-year period following the release of their acclaimed 2013 debut. In Europe, the group scored two Top 5 albums in their home country, supported the likes of AC/DC and delivered memorable performances at major events such as the UK's Download Festival. In America, meanwhile, the band appeared on the AXS TV program “Breaking Band”, played notable gigs such as Rock On The Range and the inaugural Motörboat cruise and toured alongside I Prevail, Through Fire, Fozzy, Amaranthe and Sebastian Bach.