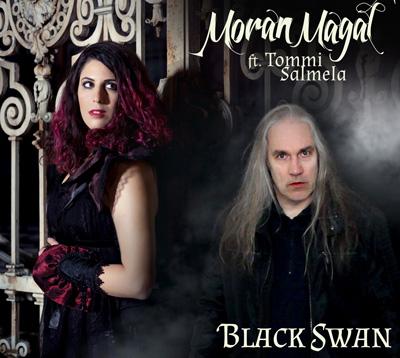 Moran Magal, Israeli pianist, singer-songwriter and new Berliner who is well-known to insiders due to her various cooperations with and contributions to recordings of (among others) Orphaned Land and Stimmgewalt, has just finished her new album Under Your Bed. The German backers of her crowdfunding campaign are now looking forward to meeting her on Saturday, May 4th, in Berlin’s intimate Cassiopeia club, when she and her gang of metalheads are giving a very early release party. All early birds are welcome to this sneaky pre-listening event, where the band will play the full album for the first time and sell a limited amount of CDs with an exclusive headstart over the record’s official market entry. The release date itself will also be announced that night.

To top it all off, Moran Magal and Tommi Salmela (TAROT) picked one more album track, Black Swan, as a single and lyric video. As usual with Moran, there is a story to the song, and a particularly serious one at that! Inspired by both her constant observation of the real world and the societies in it, and the numerous adaptations of the Swan Lake theme, she couldn’t help but draw some pretty intriguing similarities that might show some cause and effect – the Swan Lake being the latter and probably the reaction to an unjust, life-vitiating cause. Here is her view on the matter:

"Black Swan is a song inspired by the Swan Lake fairy tale. In swan lake, the princess is captured by an evil sorcerer and he is turning her into a swan so no one else could see her and take away her freedom. But we are now in 2019, and there are still women who are not free to play an instrument, to dance, to sing, to dress how they want, forced to cover their body and face, and not free to be with the one they love. In this song I wish to give strength to those women and hope for freedom for all women. I felt it should be a duet with a guy because then we have both sexes representing this message, and I fell in love with the beautiful voice of Tommi Salmela who sang with me in this song.”

Moran Magal: New Video + Album "Under Your Bed" Out Today!

Moran Magal release video for Take Your Money together with album Under Your Bed!

Moran Magal: Third Single ‘Tododo‘ gets us excited for ‘Under Your Bed‘