While the annual fake winter has now advanced into a true parody of April weather, letting us hope for an early spring, the speed folk rebels of FIDDLER'S GREEN have gone out of their way to make this  unforgettable album release happen.

Starting tomorrow, you will find the following attractive loot in all stores:

Even the STANDARD EDITION of HEYDAY comes in a nicely designed digipack, or as a double LP of 180 gram vinyl in a stunning gatefold. If you want more color, just grab the limited double vinyl in luscious green. The 2-CD DIGIPACK DELUXE EDITION includes The Punk Sessions with 7 bonus tracks. The big hit, however, is the HEYDAY LIMITED EDITION FANBOX: Including the aforementioned 2-CD DIGIPACK DELUXE EDITION (15 tracks plus 7 bonus tracks The Punk Sessions), a wall clock, a flag, patches and a postcard set. The similar, but signed, EMP fan box is already sold out.

Of course it would be really irresponsible of the Fiddlers to let their fans starve until tomorrow's release – which the band would not even have the heart for. So to celebrate they have the third and last video single Cheer Up, which dances on the ridge line between the debit side and the credit side of human co-existance – thoroughly stimulating and enjoyable.

„This song has its origin in a quote by Mark Twain: 'Cheer up, the worst is yet to come!' You can take this as a sympathetic statement because it helps you to handle upsetting things more relaxed – the reasons for being upset sometimes aren’t really that relevant. Whereas the prospect of the ‘worst’ eventually happening adds a certain sarcastic and cynical note to it. Actually it can only get worse...and this is why we should make the best out of the situation and see the positive, before everything is irreversibly going down the drain.
In the song, this is a best friend’s advice to his buddy, who has just spent the night with a casual acquaintance and has to realize in the following morning that not only the girl, but also his money is gone.

I think the story of the song has been realised in the video very well. A slightly more optimistic outcome was added to the open end of the song, which can still be interpreted in more than one way...it’s up to you!“

Link for the video premiere:

More about HEYDAY and the upcoming tour:

The year is 2019 AD. Musicland is entirely occupied by casting shows, idols or faceless plastic pop and suffers from declining music sales. Well, not entirely… One small band of musicians still holds out against the invaders.
For almost 30 years, Fiddler’s Green have been playing the role of the indomitable Gaulish Village among Germany’s indigenous rock bands. Their form of resistance against mainstream musical practices? Playing rocked-up Irish music as a German band. Where in the beginnings they were at times met with belittling smiles, the sextet nowadays is sitting prettier than ever and can rightfully claim to be one of the country’s most successful bands.

The band’s new album HEYDAY (release: March 8th, 2019) underlines this work ethic vociferously. Alongside producer Jörg Umbreit (In Extremo, Dritte Wahl etc.), the musicians captured 15 songs that indeed sound typically Fiddler’s Green on the one hand but also pack an unfamiliar yet very agreeable punch on the other.

Of course, the band will also be performing HEYDAY live across the republic and in neighboring countries, where the audience can expect exactly this bundled load of merciless playfulness and an Irish-folky punk rock hit explosion, which will leave no one standing still. Even after almost three decades, Fiddler's Green still manage to surprise themselves and the fans, especially with their live shows. Although their new album HEYDAY, which is their 14th studio output, could finally make the band hit it big time: Fiddler’s Green will never make any compromises in order to reach that goal. The three video singles No Anthem, One Fine Day and Cheer Up give one more impression of this attitude. 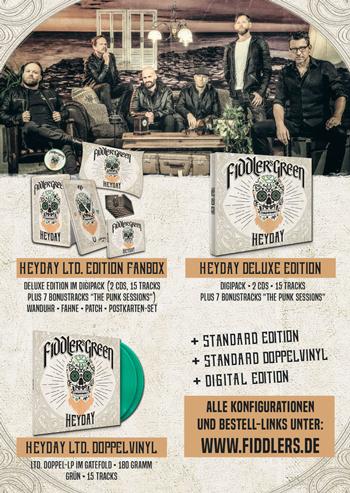 The year is 2019 AD. Musicland is entirely occupied by casting shows, idols or faceless plastic pop and suffers from declining music sales. Well, not entirely… One small band of musicians still holds out against the invaders.