There are your standard heavy metal festivals – and there is 70000TONS OF METAL.

Just imagine: You’ve just returned from a beautiful island in the middle of the Atlantic Ocean after spending hours enjoying the sun and white sand on a wonderful Caribbean beach. Feeling the warm wind blowing in your face, you are now sitting in a hot tub on a giant cruise ship, up close to a large stage, headbanging to your favourite band. You are watching from one of six whirlpools with a direct view of the stage on the pool deck, which is the biggest open air stage structure to sail the seas. It’s loud. It’s full of metalheads from all over the world. Sounds perfect? Well, it is.

It’s been more than a week now since most fans have returned home from a more than successful 70000TONS OF METAL 2018 - round 8, more than a few of them still suffering from a serious case of PCD (post cruise depression) following four incredible days on board the Independence Of The Seas. More than 3,000 metalheads boarded the ship together with 61 bands, each of which was going to perform at least two shows (124 shows on 4 stages in total) during this unique event at sea. Some fans spent the shore day in Turks and Caicos with their favourite band during one of the various artist-led shore excursions. Picture yourself swimming with MESHUGGAH in the awe inspiring presence of majestic stingrays, or snorkeling with ABORTED and EXHUMED by your side to make you feel safe. Wolves on a safari? Sure, go on a coast-to-coast island tour with WOLFCHANT!

On top came the one of a kind All-Star performance “Jamming With Waters in International Waters” featuring members e.g. from Kreator, Sabaton, Cannibal Corpse, Destruction, Sonata Arctica, Meshuggah, Enslaved, Primal Fear, Dark Tranquility, Voivod, Seven Spires and many more, playing all time heavy metal and hard rock classics together on stage for the first time ever.

And there was another premiere, a record rather, that no one expected to be broken after last year’s peak of 74 different nationalities represented on board: 2018 beat 2017 by one more nation and proved once again that 70000TONS OF METAL is the most global cruise, uniting 75 nations on board this year. Germany, USA and Canada were among the top five of the most represented nations aboard. The youngest sailor was only 1 year old, the oldest turned 79 on the ship.

So watch out, Sailors: After the cruise is before the cruise. Fans can already look forward to round 9 of 70000TONS OF METAL, THE original, The World’s Biggest Heavy Metal Cruise sailing from Miami/Ft. Lauderdale to Labadee, Haiti and back, January 31 – February 4, 2019. 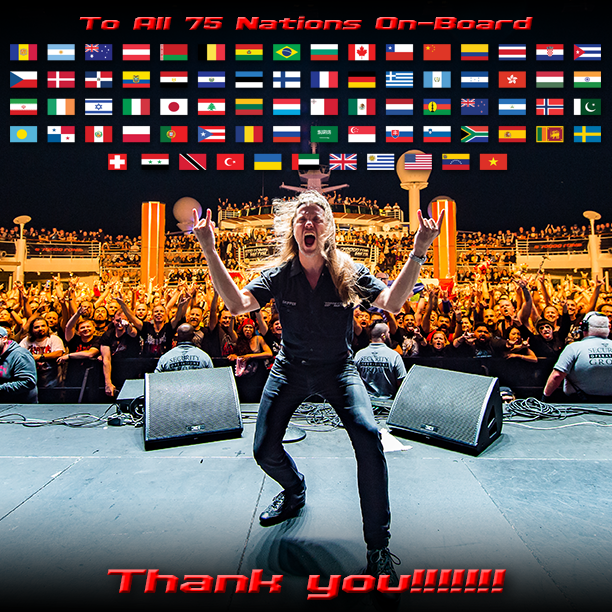